Garry Malone explores some of the non-traditional Reiki Symbols that Reiki Practitioners use in their healing work! Have you tried any of these Reiki Symbols?

The three traditional Usui symbols cover every eventuality. They are omniscient and omnipotent. However, there are several NON Traditional Reiki symbols which have specific purposes and can be used in conjunction with The Full Reiki Sandwich.

These additional symbols are not an absolute necessity, and of course you can access Reiki without any of the symbols. We believe the student should try using the additional symbols in their daily practice and decide for themselves whether they want to incorporate and use them in their future Reiki Practice. 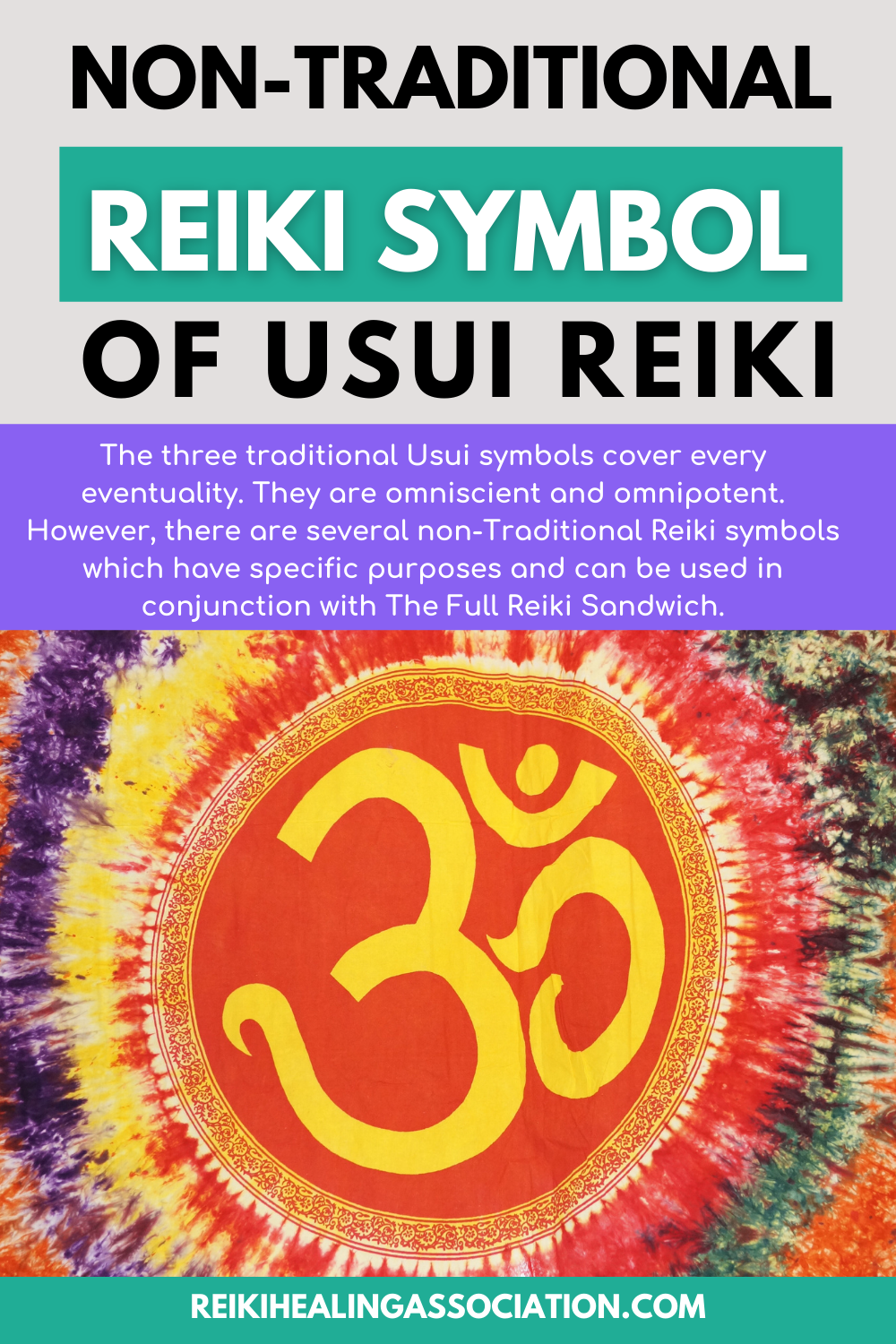 This symbol is used for grounding and can be used at the end of each reiki treatment session. Certain Reiki branches use Raku, a Tibetan symbol, to close the connection between teacher and student after attunements. Similar to a lightning stroke, it focuses and grounds (brings into the earth) energy. This symbol is also incorporated into the Tibetan Dai Ko Myo (Tibetan Master symbol) and in an elongated form in the Tibetan Fire Serpent which are taught in the third degree. 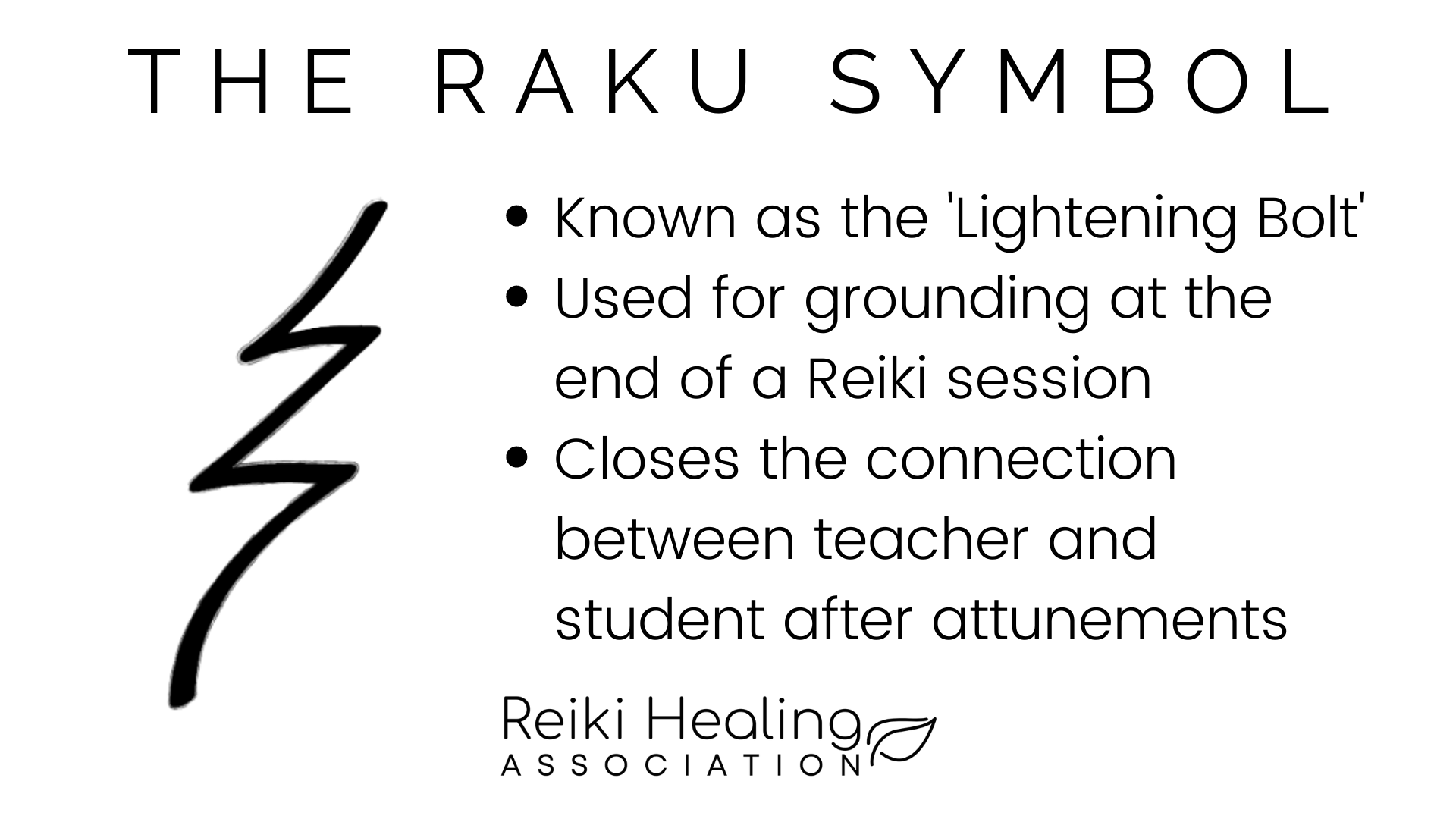 You may find it brings balance and additional power to your work. If you do notice a positive difference you can incorporate it into your practice and daily use. 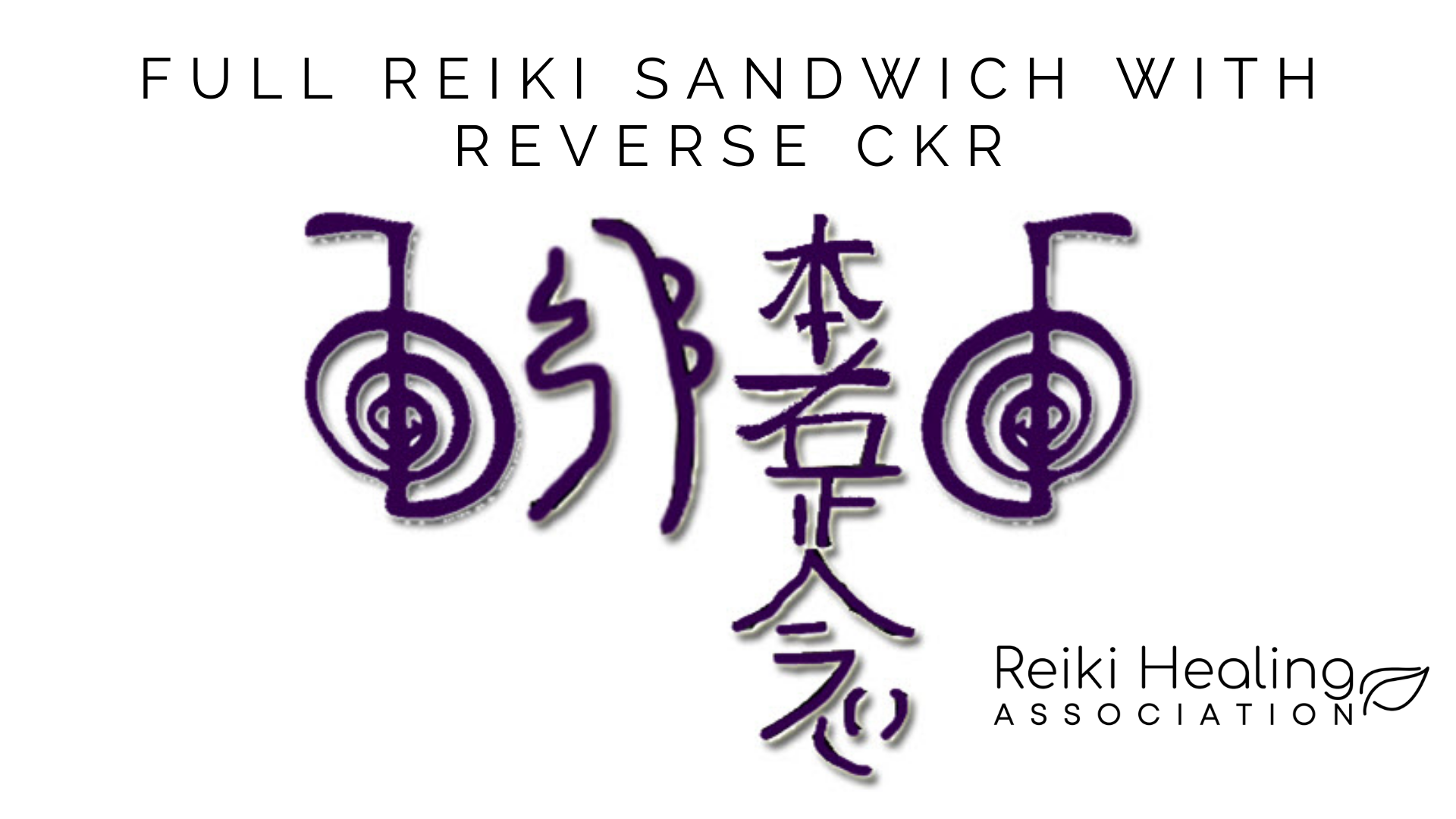 The Zonar symbol represents infinity, timeless, ageless, perpetual and eternal. It is drawn as the letter Z with the last stroke rising up into the infinity sign drawn three times across the centre of the Z.

This symbol is used for past life issues and karmic and inter-dimensional problems that are difficult to define. Often there are problems and issues manifesting in our present life that are leftover remnants from a previous life or lives.

The Zonar symbol enhances distant healing, and also helps with emotional issues and dissolving toxic relations, addictions and repeating patterns as well as toxic emotions like shame and unworthiness. Like the HSZSN Symbol, the Zonar released trauma from the cellular level. 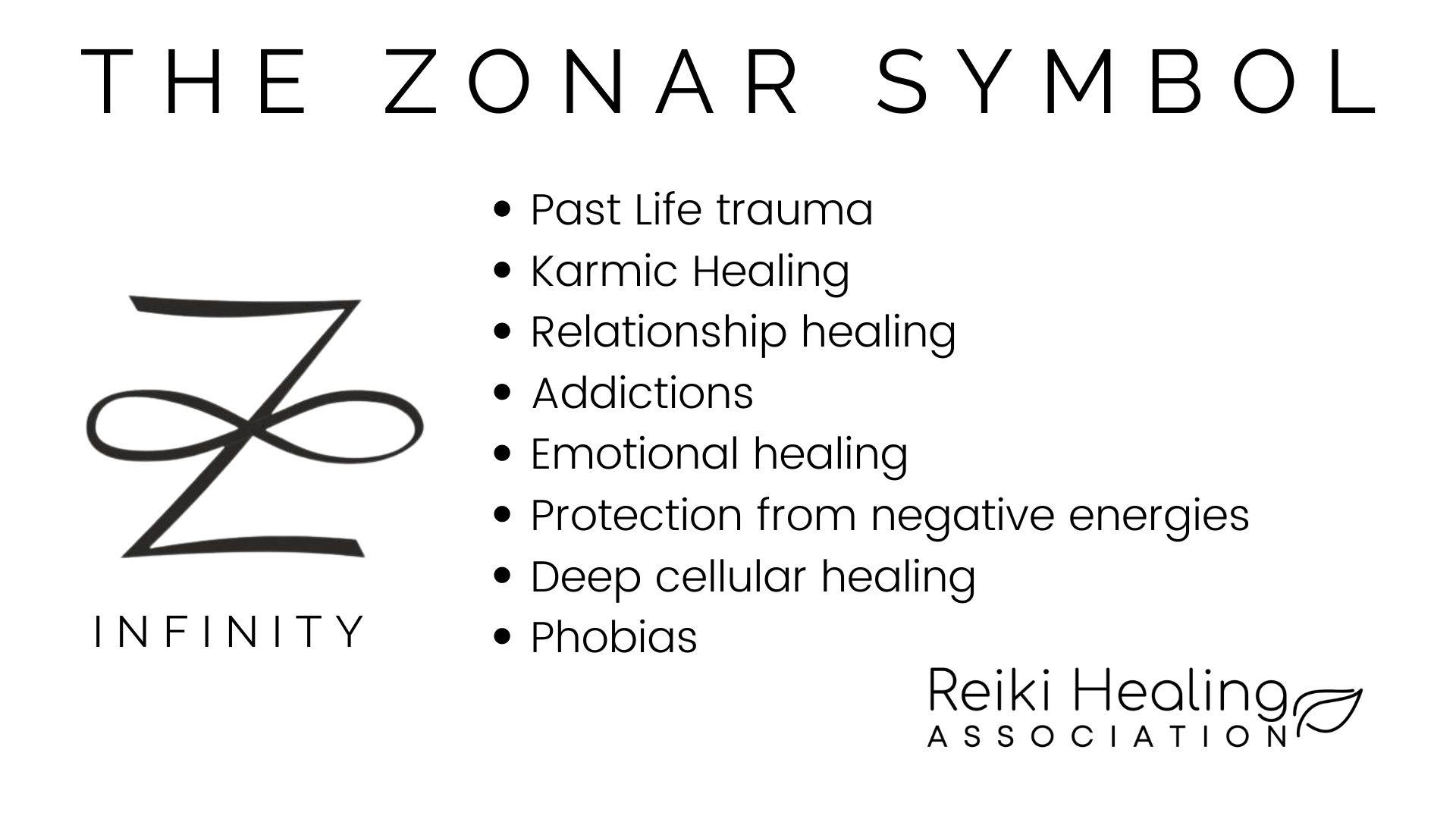 Also known as the Tibetan Fire Serpent, this symbol represents Energy Awakening. The snake-like coil symbolises the Kundalini energy travelling up from the base of the spine at the root chakra. The Fire Dragon’s surging upward spiral of energy cleanses and aligns  the chakra’s.

The Tibetan Fire Serpent has many uses, including ensuring balance and equilibrium in the chakras. It is a grounding symbol bringing calm and serenity, and it is also used for spinal and back problems and is said to be good for the menopause. If someone is suffering from backache, you can draw this symbol all over their back.

This Symbol is used by a number of Reiki branches, often during the attunement process to cleanse the main energy channels and also before a healing session. Again it is drawn down the back of the person receiving the attunement.

To draw the fire dragon you begin at the base and draw an anti-clockwise spiral two and a half times. Continue the line upwards in a series of waves. Complete the symbol with a horizontal line across the top drawn from left to right. 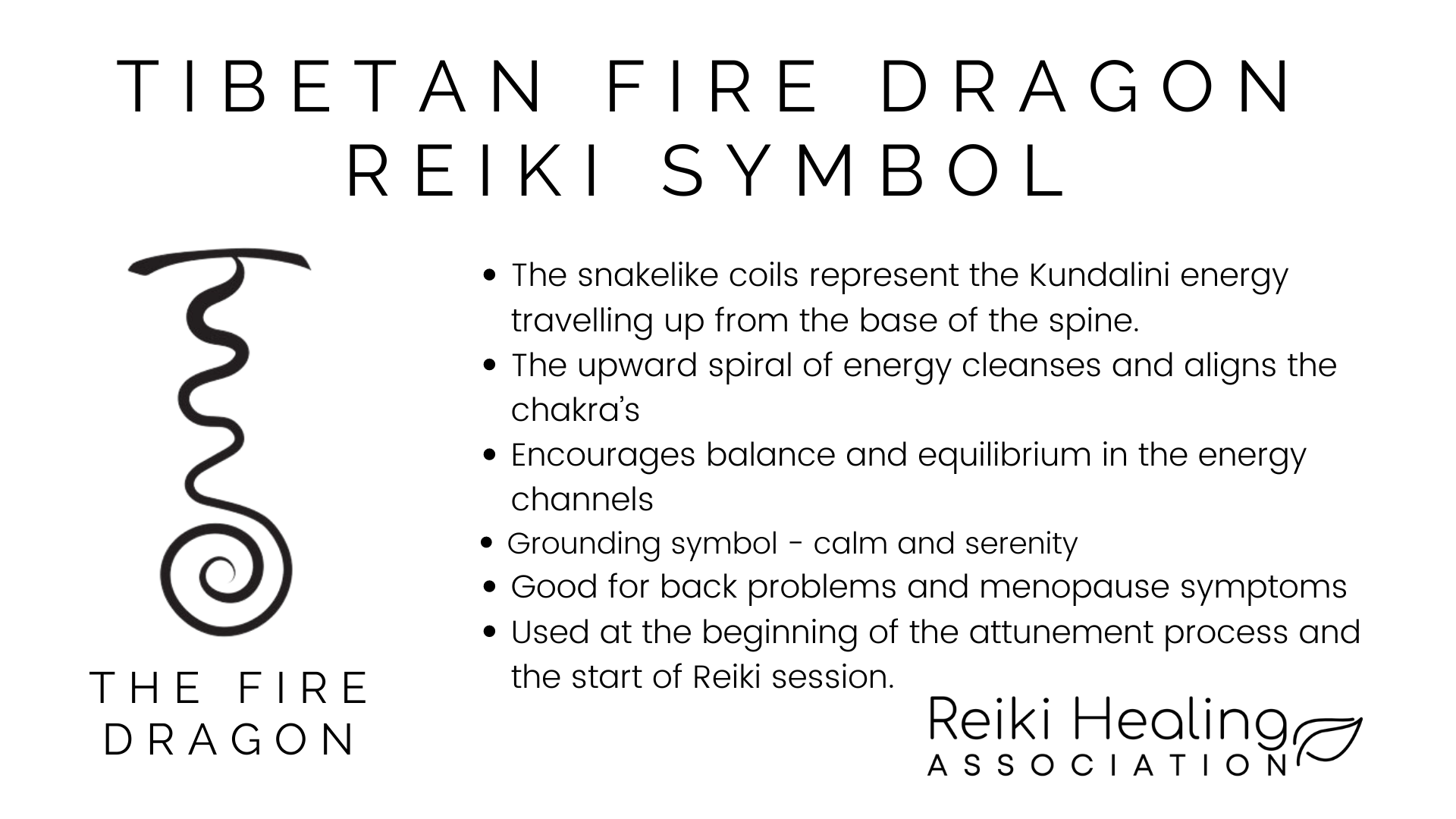 The Harth Reiki Symbol is the symbol for love, truth, beauty and harmony. It can be used to dissolve negative patterns we unconsciously use to insulate ourselves from the truth, thus shattering delusion and denial.

It is used for healing emotional and physical issues of the heart, removing fears and grief and opening up new paths for change and love.

The Harth Symbol clears and opens the channels to higher consciousness.

Often known as the master symbol as it is used in some initiation ceremonies by the Reiki Master. All strokes are from left to right, top to bottom. 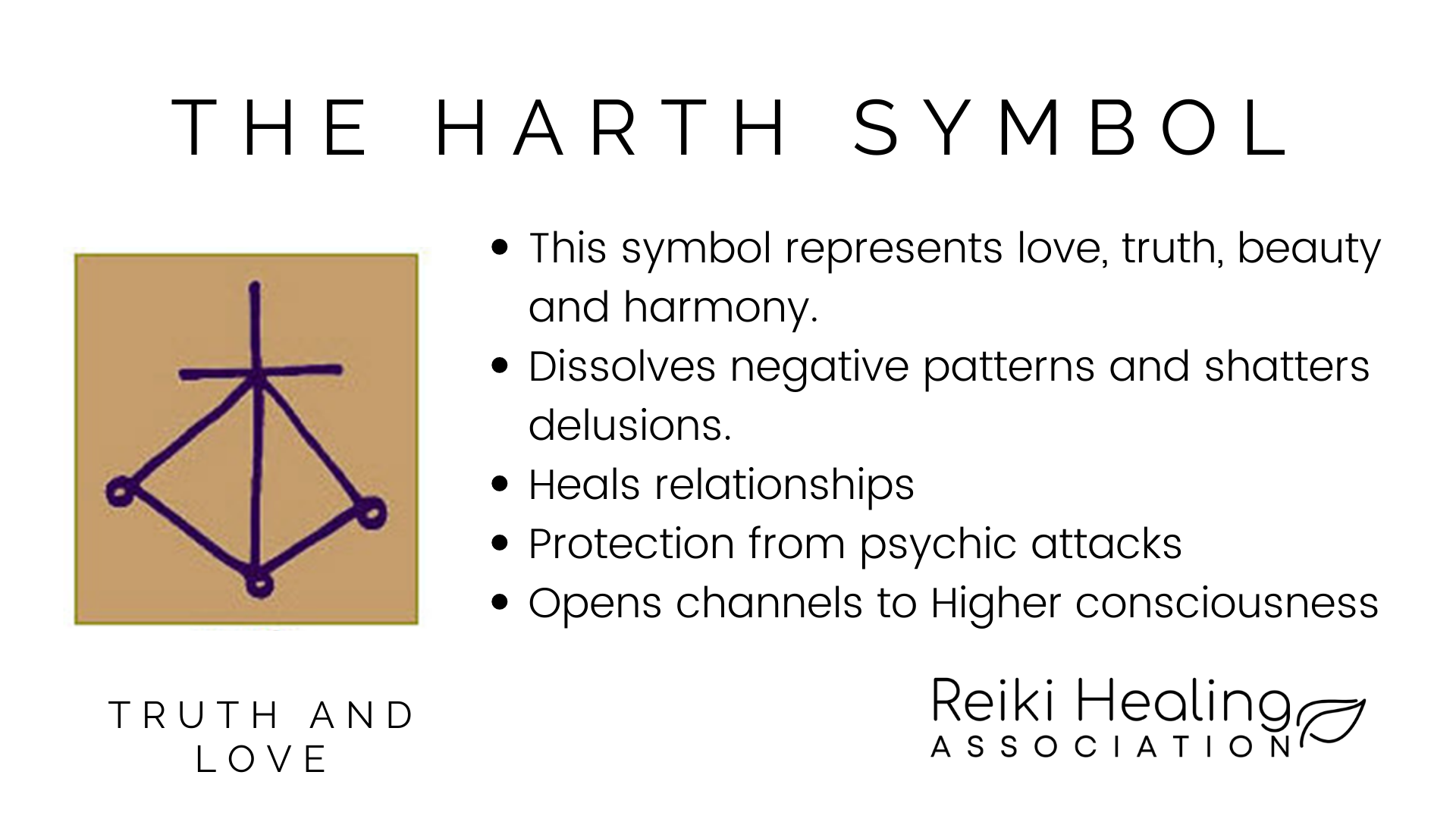 The Johre symbolises white light. It is used to release blockages, for protection and to transfer healing white light. The symbol can be added to the Reiki Sandwich to send healing energy and protection across space and time. This symbol is difficult to draw so try to project the symbol from your third eye chakra. 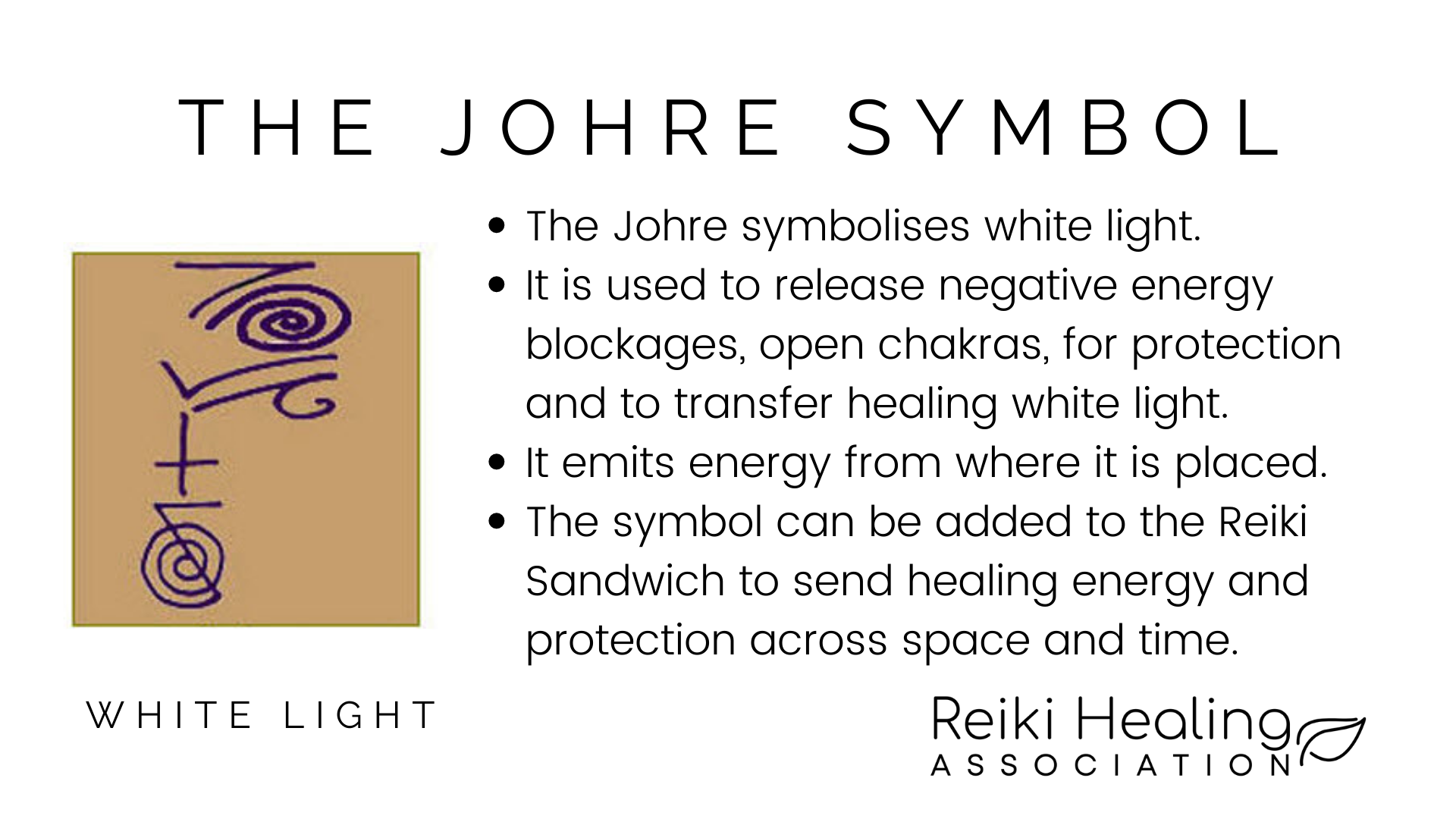 Considered a Master symbol by Buddhist monks who use it for exorcism. Motor means ‘to go in,’ while Zanon means ‘to come out.’ This symbol is used for viruses, parasites and infections. When the Motor symbol is drawn, the little squiggle catches the virus or bacteria. The Zanon symbol is then drawn and it reverses polarity and leaves the body taking the virus or bacteria with it. To activate the symbol, draw the Reiki Sandwich as Follows: 1) CKR 2) Motor Zanon 3) Reverse CKR. (CKR+MZ+RCKR).

The Motor Zanon Symbol is used to boost immunity and remove spiritual, emotional and physical problems. It is also thought to heal DNA and release traumas. 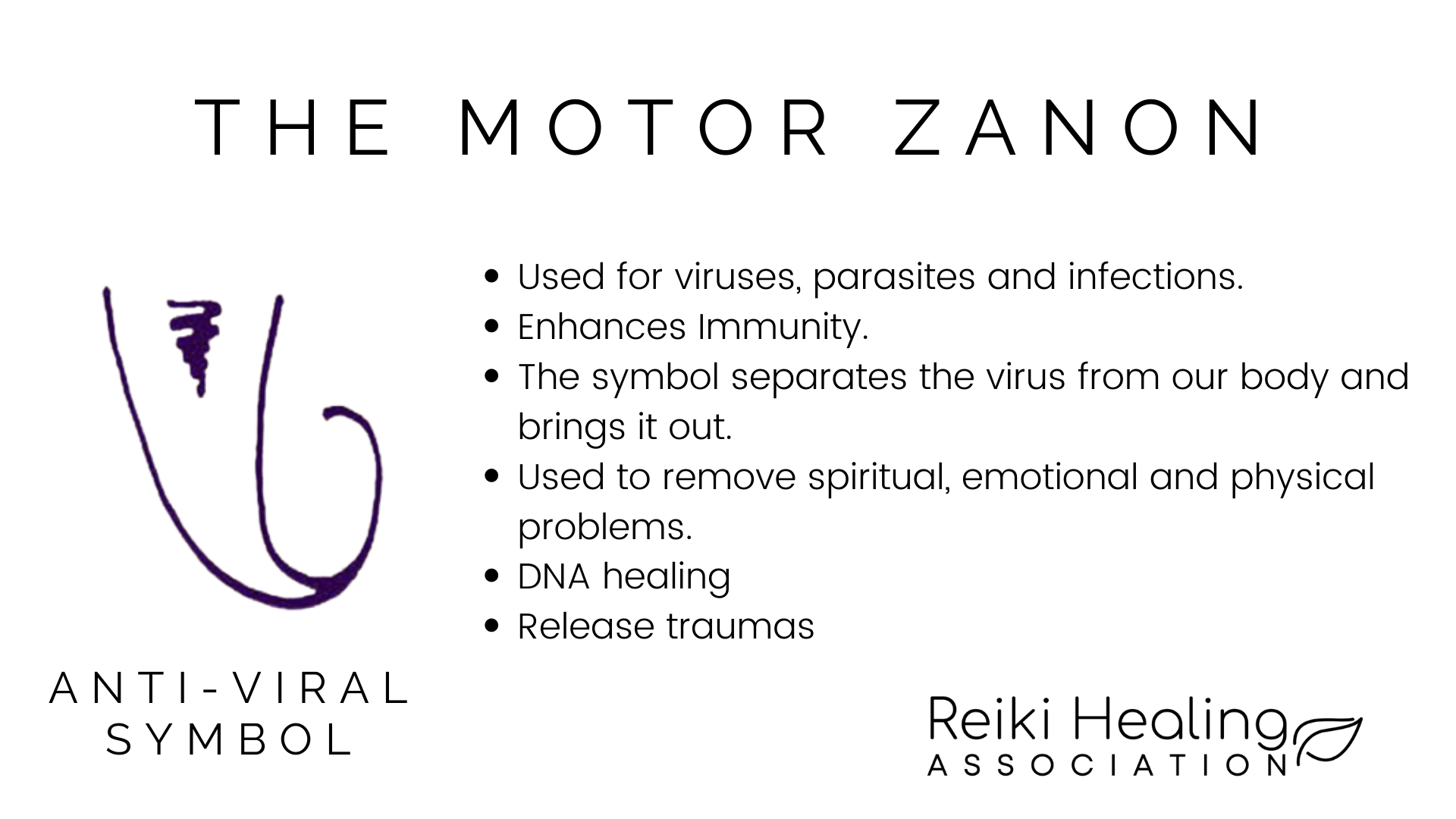 The Ren So Mai

Pronounced ‘LEN SO MY,’ this symbol represents pure, infinite and unconditional love. By placing the Symbol over the Heart Chakra we can stimulate healing of emotional problems and situations. The Ren So Mai brings warmth and harmony, resolving relationship issues and increasing self-esteem and self-love.

Draw the figure eight (8) first followed by the dickey-bow shape. Remember to draw from top to bottom, left to right. 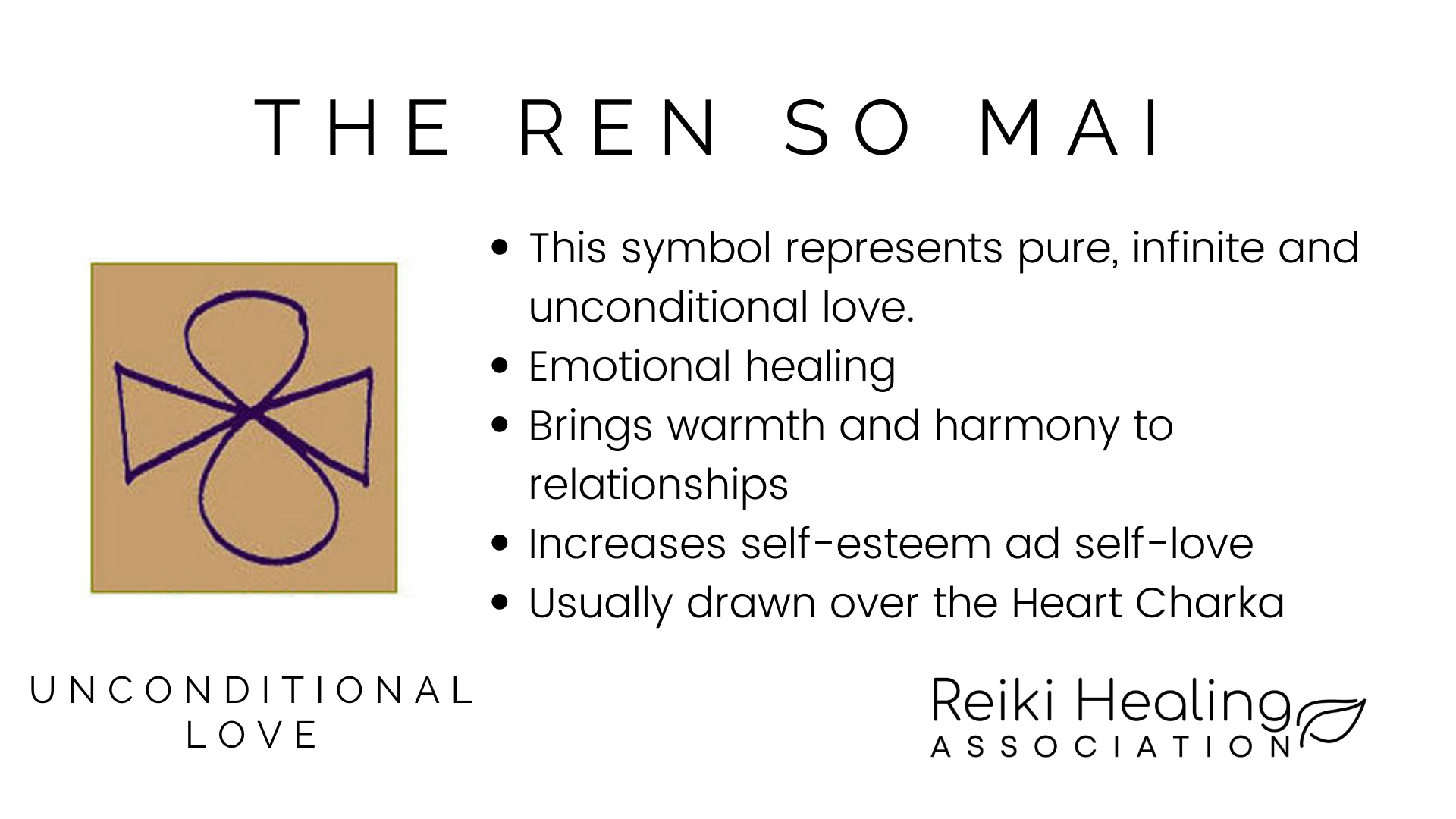 OM is a Sanskrit symbol used for protection, healing and meditation. Om represents the whole universe in one single word, the source of all creation. It sounds like “ah-oh-mm” or “aum” and is frequently chanted. Some Reiki branches, including Karuna Reiki, use this symbol. Listening to or chanting the sound “om” helps to connect spiritually. Some Reiki masters play om chanting music during the attunement process, or during a healing session. It is said to purify and protect the aura.

The Om Symbol creates a pathway to the Higher consciousness. 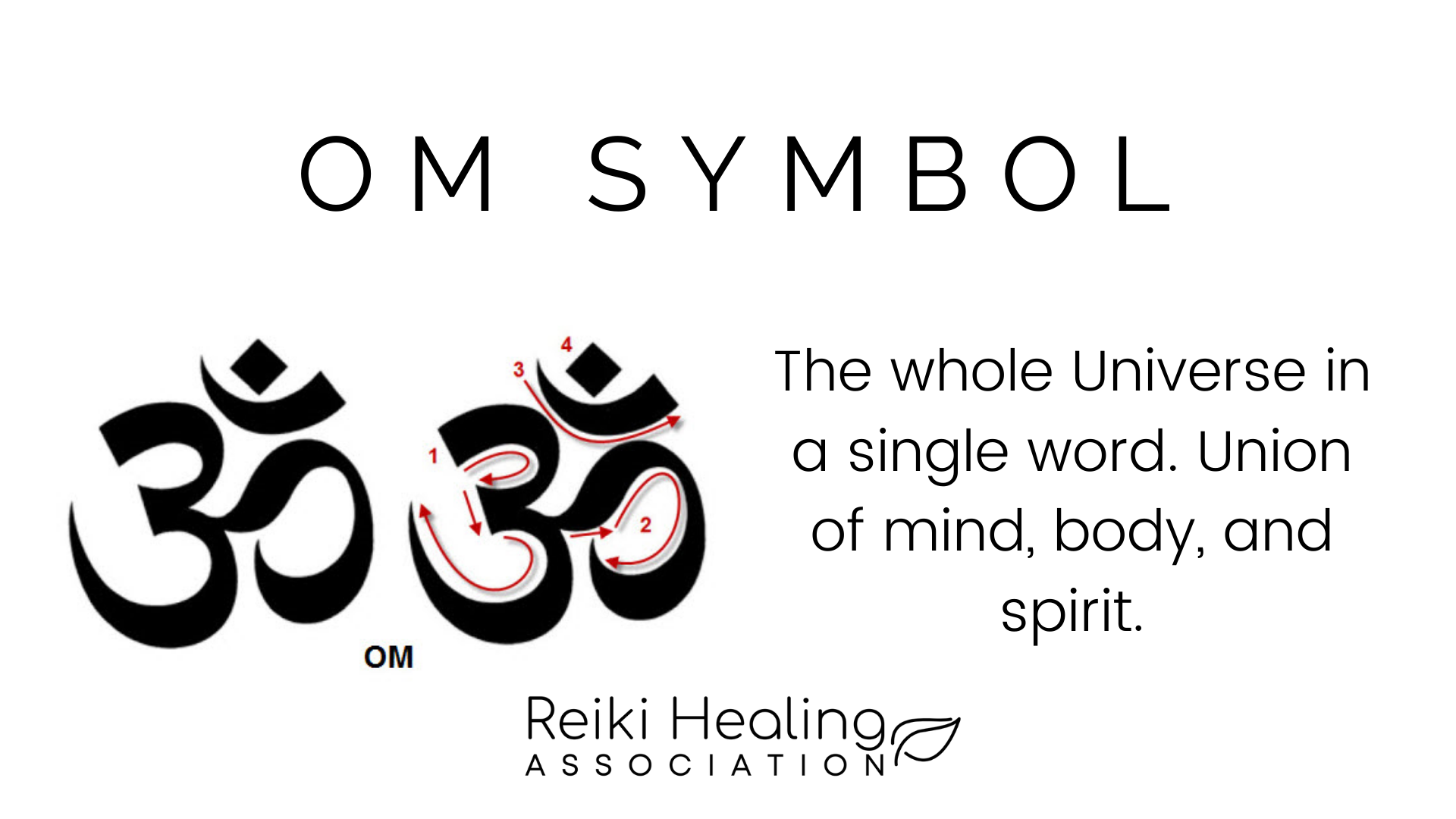 REMINDER: Always use the Cho-Ku-Rei symbol to activate all of the other symbols and Always intone the name of the each symbol that you have drawn; visualised, or projected it onto a subject, three times. 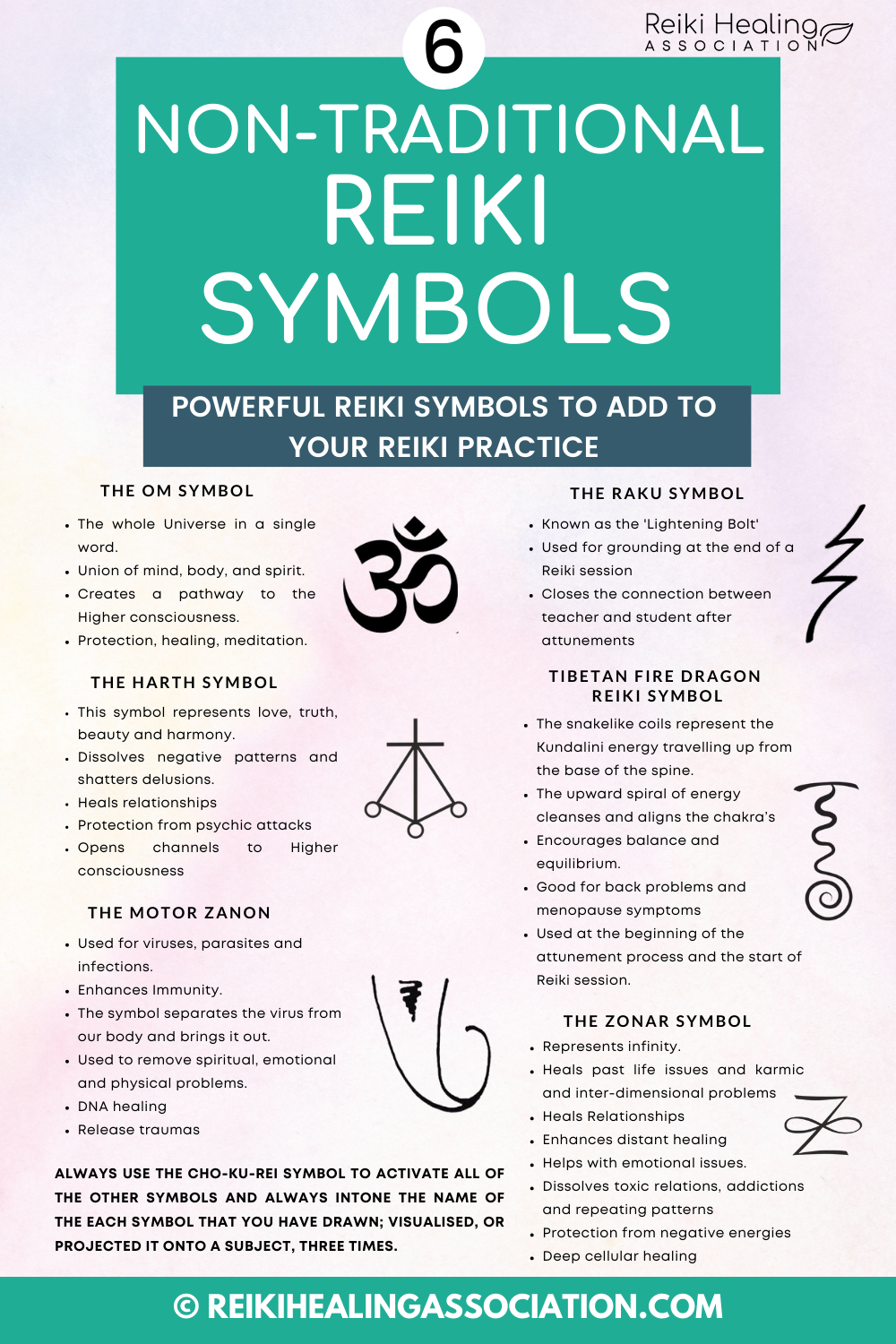 Garry Malone, RMT, CMH, CHyp, MPNLP, Best-selling Author, Speaker, and the Founder of the Reiki Store, Reiki Healing Association and Reiki Business School. Garry’s mission is to help Reiki professionals build their dream Reiki practice by turning their passion for Reiki and helping others into a successful, profitable and sustainable business.